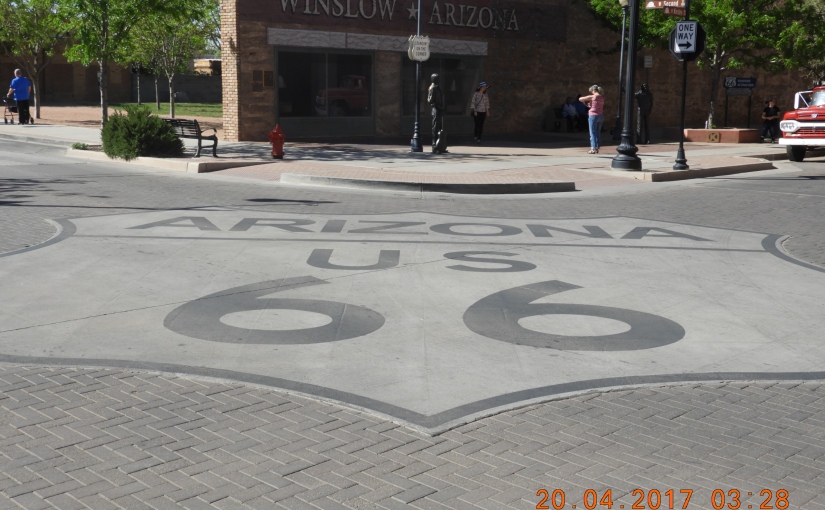 OK.  We had a problem with the internet the last 2 days so we were unable to update you on our travels – so stand by for a two posts today  🙂

We woke up in Gallup NM and decided we needed to stretch our legs a bit – meandering down the highways is good for your soul, but less good for your muscles.  After a quick breakfast we parked Ursula and walked through the 7 or 8 blocks of shops and souvenir stores that are in Gallup.  It was fascinating to see the beautiful pottery, beadwork, and jewellery.  I bought a turquoise and silver ring and earrings in one shop, and another pair of silver earrings in another. I may have bought some pottery for the sisters but I’m just not saying at this point…

We stopped at El Rancho – an old hotel that was built in the ’30’s to accommodate the stars that were in the area filming. The owner, Armando Ortega, was a film producer who realized that this would be a profitable venture. Considering the prices of the jewellery in the gift shop, it must indeed have been a very profitable venture.

After shopping and strolling for an hour or two, we made it back to Ursula and were ready to jump back on Route 66 and head towards our next destination: Winslow Arizona.

The road was as ruggedly beautiful as the day before with lots of rock outcroppings and mesquite bush.  Before too long we were cruising through Holbrook Arizona – a place I had not been since I was 21.  To be honest, nothing looked familiar.  I was hoping we’d get there and I’d say ‘That’s where we had lunch and that’s where we went shopping’, but nope.  Instead it was more ‘I think this looks familiar?’. It is still a small but interesting town with lots of stores that sell souvenirs and rocks.  Yep. Rocks. They have a rock festival every year which we had been to when I was 21.  There were some time-stood-still buildings which Warren photographed and then we turned Ursula west towards Winslow.

If you are not familiar with the Eagles song that will be referenced through the next part of this blog, I encourage you to click Here and listen to the song before reading any further. The blog’ll just make more sense if you do  🙂

Winslow Arizona doesn’t have a huge presence when you first arrive.  It’s pretty much the same as any other small town that has been devastated by the interstate. Until you get to THE corner.  There it changes to something very unique: there is a steady stream of people filing through this corner to get their picture taken with the statue of Jackson Browne or Glenn Frey which are both on the corner.  They even have a red flatbed truck pulled over by the statue and a huge mural behind the statue of a girl in a red flatbed Ford looking out of the window at the statue.  It is hilarious.

See that girl there, slowing down to take a look at Warren? Yep.

There are two stores peddling ‘standing on the corner of Winslow Arizona’ t-shirts, oven mitts, shot glasses, ballcaps, you name it, and playing in the background is a recording of the Eagles songs in a loop over and over and over.  There is a motel in town that has a sign that waggishly encourages you to stay at their hotel so you can say you were ‘sleeping on the corner in Winslow Arizona’. Honest to god.  As we were leaving we discussed the fact that the song just says A corner in Winslow Az, not specifically THAT corner – good marketing on someone’s part. 🙂

After Winslow we put on our driving caps and headed for Phoenix Arizona.  Yep, time to head to the desert.  So we drove.  And drove.  And there were many trucks

and lots of wind – but that’s what you have to do to get to Phoenix.  We drove past Flagstaff where we reached almost 7000 ft above sea level and the temperature dropped to 18c. According to Wikipedia, ‘Flagstaff is situated in the largest contiguous ponderosa pine forest in North America, in the heart of the Coconino National forest’. The pine trees and rocks made it seem like Banff in Alberta, but the elevation is quite different as Banff is only at 4600 ft.

If you are driving through, keep your eye on the thermometer as you reach the peak and start heading down again.  We gained 10 degrees as we descended into the desert on the other side of the mountains.  By the time we got into Phoenix at about 6:30 (we also gained an hour so we thought it was 7:30, but nope…) it was 32C – that’s almost 90F for those of you who aren’t sure.  When we stepped out of Ursula it was like sliding into a nice warm hug – it was wonderful. Warren and I were grinning at each other like kids.  How did we get here?  We just got in the damn truck and drove here.  There are palm trees here.  And also cactus.  And also orange trees.  And also all the trees and bushes and gardens are full of flowers.  It is Wonderful.  So we decided to stay for 3 days – I mean, you can’t turn your back on this kind of warm, right?  🙂

We checked into our hotel, had a quick supper, then into bed so that we could wake up in Phoenix Arizona.  I’ll fill you in on today’s adventures in the next post…

It has been a chaotic and heartbreaking year. But I'm climbing back out of this chaos, bent on carving a new path using all the things I have learned. Stay tuned for new stories :) I hope you enjoy what you read! View all posts by Sandy Kenyon