Today we grabbed a couple of coffees and headed out on the road – we couldn’t find a breakfast place in Shamrock so decided to wait for breakfast.  The first thing that became evident as we travelled through the Texas Panhandle is that the topography was changing – instead of the trees and waterways we’d seen as we were leaving Oklahoma, we were now seeing the flat scrubby landscape that you see in the old western movies. The land is harsh but beautiful – the further we travelled west, the higher the temperature climbed.  The mesquite bushes and scrub brush broken by gullies and coulees – it was just beautiful and we talked about how hard it must have been to travel this route 40 years ago.

We eventually found the BEST breakfast place in McLean Texas . We pulled into town about 11:30 and after cruising the almost vacant town – another victim of the interstate nearby – we found Lolly’s Market.  Lolly’s Market is a family run business that is a grocery store, a restaurant and a coffee shop all rolled into one.  The groceries sit on two huge wooden shelving units that run down the left side of the room and chrome and formica tables are arranged on the right side of the room.  The kitchen and counter where you order are at the back, right beside the buffet station.  There were a few young men in the back who were eager to take our order and their mom, we found out later, was cooking in the back.  There were a few regulars there when we went in and we got a couple of curious but friendly looks.  We ordered our breakfast and a couple of coffees and then went and sat at a table.  There were a few people coming in and getting lunch to go or just a coffee, and each one was greeted by the people already in the store when they came in. Clearly this was the hub of McLean. Soon our breakfast came and after munching up some really great bacon, eggs and Hashbrowns, we said goodbye and got back on route 66.

Our next stop was Amarillo Texas where we went and saw the Cadillac Ranch. I had seen pictures and articles about this before so I was really excited to visit this site in person.  The cadillacs were set up originally in 1977 and looked like the first picture.  This is what they look like Today in the second picture. 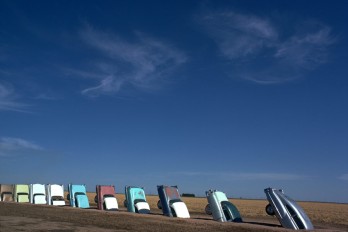 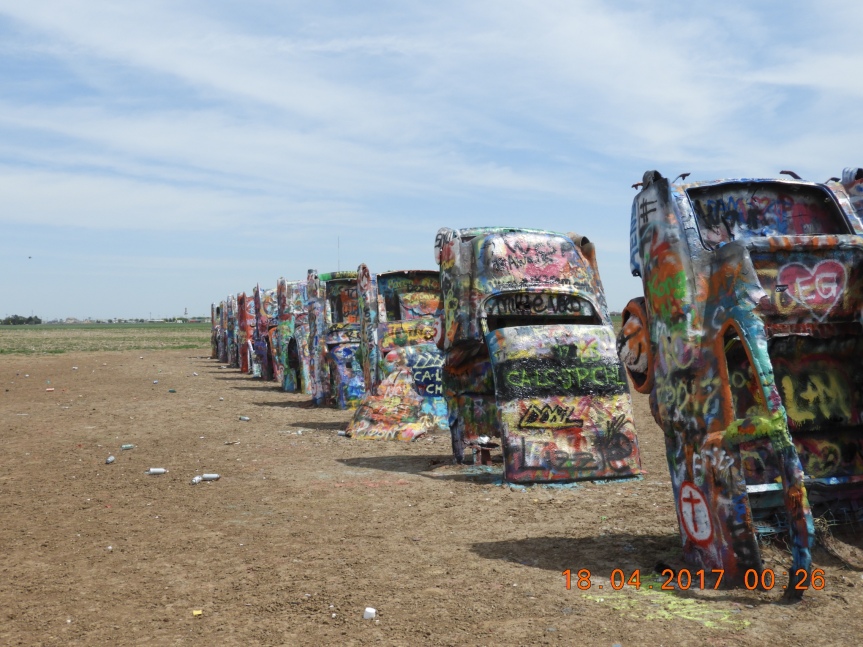 As you can see, the cadillacs have changed.  The great thing is that when this art was installed, the point was to have people come and see the cadillacs and they were encouraged to add their own touch. The cadillacs have so much paint on them that they are distorted and feel spongy to the touch in some places.  It is fantastic to see what 40 years of paint have done.

We, of course, could not leave without adding our touch to the Cadillac ranch so here is a picture of what we added: 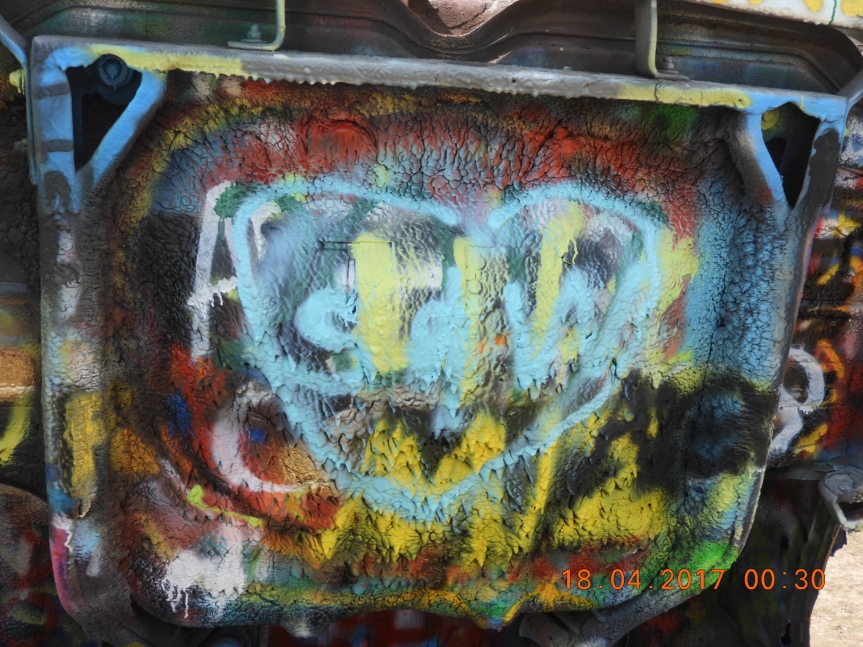 Yes. It’s S&W with a heart around it.

I hope if you are ever in Amarillo Tx you go and see this – it’s really worth it.

After Amarillo we jumped back on the road and headed towards Tucumcari NM.  It is another one of those towns that time stopped for once the interstate was built and Route 66 wasn’t travelled as often.  Many of the original structures are still there – some renovated and repurposed, some restored, some just sitting and baking in the sun. The town is really fascinating and it feels very much like you’ve just stepped back in time. We bought a couple of souvenirs and then once again into the truck.

The next stop was Santa Rosa – which is where we are tonight. This town is a little larger than Tucumcari but has the same sort of feel.  We will be visiting Bozo’s car Museum tomorrow and maybe the pottery store – there’s a place that makes pottery and does hand spinning – it should be interesting. I’m sure we will have lots to say about Santa Rosa tomorrow.

We are headed for Albuquerque next so stay tuned!